I fell in love with my friend with benefits

Friends with benefits is a fairly simple and self-explanatory phrase, yet the world inside these scenarios is often incredibly complex.
Friendships could be ruined, emotions heightened, or even love lost when people try to have sex with no strings – or feelings – attached. Of course, there are benefits (as the phrase clearly indicates), yet how do these types of relationships typically play out?

We surveyed 1,023 Americans and Britons who had experienced a friends-with-benefits relationship. They told us exactly how it ended (or continues) and what happened along the way. If you’re as curious as we were, you’ll want to keep reading. 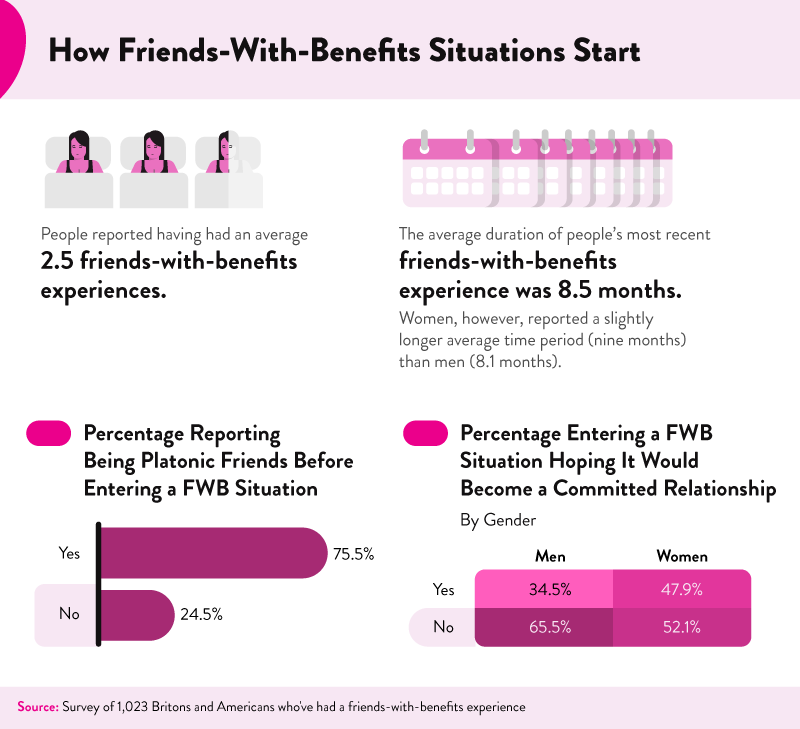 Before looking into the mechanics of friends with benefits (FWB), we were curious to see how frequently these things happen. As it turns out, respondents had had not just one, but an average of 2.5 FWB relationships. In terms of duration, they lasted 8.5 months, on average. For comparison, the average British 20-something’s relationship lasts four years.

Most often, FWB relationships came from platonic friendships. Seventy-six percent of respondents said they were sex-free friends at the beginning, which eventually changed. Many people didn’t have any secret hopes or agendas.

It was not at all uncommon, however, for people to hope a romantic relationship would evolve alongside the casual sex: 47.9% of women and 34.5% of men had an FWB they hoped would later become a committed partner.

The next question that grabbed our attention was whether the sex was better in committed, romantic relationships or in FWB arrangements. Ultimately, each seemed to have their own sexual strengths and weaknesses.

In their most recent experiences, people reported having sex with their FWB an average of 6.5 days a month. For comparison, most married couples have sex less than once per week.

During these sexual romps, most men and women in FWB relationships felt that the sexual chemistry was somewhat to extremely strong.

When asked to compare whether sex with an FWB was better than sex with a committed partner, a majority of people rated the two situations as equally good.

There is research suggesting that emotional connections often do lead to better sex, so perhaps those who are truly just friends are lacking this ability to sexually connect or open up.

Our results seemed to confirm that in part: Only 25% of men and 22.3% of women said sex with a friend with benefits was better than that had in a committed relationship.

However, both sexes agreed they were more likely to use sexual protection with an FWB than with a committed partner.

The heart of the research started to shine through once we asked respondents about the emotions behind friends with benefits.

More often than not, people reported “catching feelings” for a friend with benefits. Sixty-five percent of women and 56% of men – the majority of both genders – had developed feelings in a situation meant to remain casual.

An emotional connection likely naturally developed with the combination of sex and friendship. Though the ability to separate sex from emotions is complicated, psychology and health experts would suggest it is possible. That said, it wasn’t often happening amongst experienced respondents.

The most common way people handled emotions when they did arise, however, was to bottle them up and continue the arrangement as usual. Men were slightly more likely than women to confess when feelings did arise, and the brave souls who did take this risk were often rewarded: 61.9% of those confessing feelings had them reciprocated. If sex and emotion are heavily connected, this could in turn lead to the better sex many said they experienced in committed relationships. 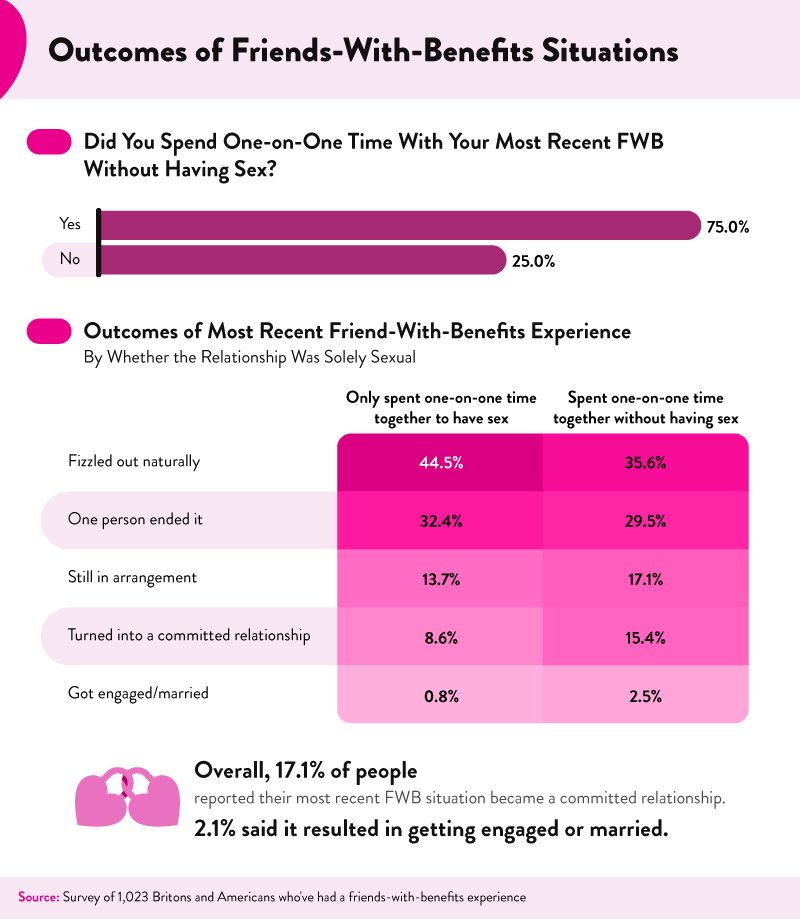 Our study wrapped up by giving respondents a chance to share the final outcome of their most recent FWB experience. As they shared their answers, however, we noticed that one key factor seemed to determine how the FWB scenario ended, and that was whether or not they had spent nonsexual time together.

Three out of every four FWB relationships spent one-on-one time together that didn’t involve having sex; this appeared to have an enormously positive impact, as far as relationships were concerned.

Those who spent platonic alone time together were five percentage points more likely to still be actively participating in the FWB relationship.

Moreover, these FWB types were almost twice as likely to develop the relationship into something serious and committed beyond friendship. And to end the study on a note of romance, know that 2.5% of those who spent platonic time together within an FWB relationship ended up getting engaged or married.

It’s not often that you come across a study that makes you reconsider what it means to have friends and partners. The data behind this project truly seemed to blur the line in an emotionally positive and even romantic way.

Most people who had partnered up with a “beneficial friend,” enjoyed it enough to do it more than once. And many who confessed feelings were ultimately rewarded.

At the end of the day, this data and other relationships will never guarantee what will happen within your own.

An FWB may or may not work, as it is with other relationships and romantic interests in your life. The important thing is to stay safe and knowledgeable, which is where Superdrug Online Doctor is more than happy to help.

Regardless of your relationship status, sexual orientation, or sexual interests, Superdrug Online Doctor’s invaluable resources and staff of open-minded experts are constantly on hand to help. Stop by today and see what we mean!

We surveyed 1,023 people from the U.S. and the UK who reported having at least one friends-with-benefits experience.

A friend with benefits was defined for respondents as the following: “a friend with whom you are sexually active for an ongoing period of time, without being in a committed or romantic relationship.”

The average age of respondents was 34.1 with a standard deviation of 10.4.

All averages were calculated to exclude outliers. This was done by finding the initial average and standard deviation and multiplying the latter by three.

This product was then added to the initial average. Any data point above that sum was then excluded.

When asked to compare the sex quality in the friends-with-benefits arrangement to the sex quality with a romantic partner, a small sample of people answered N/A, as they had not had sex in a committed relationship before.

They were excluded from the data for that particular part of the project.

The data we are presenting rely on self-report. There are many issues with self-reported data.

These issues include, but are not limited to, the following: selective memory, telescoping, attribution, and exaggeration.

No statistical testing was performed, so the claims listed above are based on means alone. As such, this content is purely exploratory, and future research should approach this topic in a more rigorous way.

It can be difficult navigating a friends-with-benefits relationship, even when feelings aren’t involved. If someone you know might benefit from the information in this project, you may share for any non-commercial reuse. Please link back here so people can view the entire project and its methodology. This also gives credit to our hardworking contributors.

Firstly… Hello ladies! Well I firstly apologise for the delay in between posts, running several jobs , a business a blog and saving…