Have you ever wondered what will happen to your sex life once you’re married?
Or maybe you’re already married and are unsure about your sexual future. Whatever side of the relationship fence you’re on, we have you covered.
We surveyed 1,011 married people hailing from the US and the EU to learn about sex inside a marriage, and discovered the most successful ways couples communicate and reach sexual satisfaction – even later into their marriage.

We even ran our findings by a licensed sex therapist to see what might drive some of these behaviours.

Read on to see what they had to say about our findings.

As couples were together longer, “less than once a month” became a more likely answer for sex frequency.

In fact, 15% of couples together for more than 15 years had sex less than once a month.

On average, the longest time married couples went without having sex was six weeks.
Older couples, together for 16 years or longer, only pushed this number by one week, saying the longest they ever went without sex was 7.1 weeks, on average.
However, there was a substantial group (19% of people) who went three months or longer without having sex.
According to Charlene Lewis, a marriage and couples counselor and certified sex therapist, it’s normal for couples to go through ebbs and flows with their sex frequency. “Every relationship is different, and life gets in the way.
Although it doesn’t seem natural to have scheduled ‘sexy nights,’ it’s sometimes needed, so they don’t get stuck in a dry spell,” Lewis said. “That goes against the myth that sex needs to be spontaneous.
If you don’t schedule it, it won’t become a priority.”
Although married couples largely reported consistent sexual activity, there were some changes.
Fifty-two percent agreed they had sex less often than they did before getting married.
Twenty-eight percent also said their sex life became more boring after marriage.

WHAT TO LOOK FORWARD TO AFTER YOUR VOWS

It’s already widely known that sex can be more enjoyable between people who love each other and feel comfortable around one another, and our data showed sex could even become more exciting after marriage. 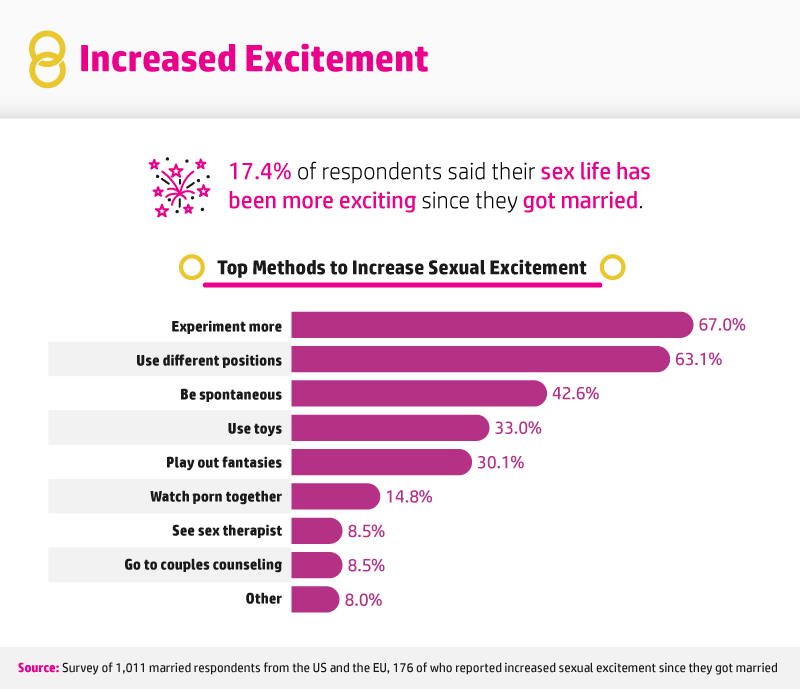 To that, our respondents said they experimented more after marriage (67%), tried different positions (63.1%), and became more spontaneous (42.6%).
Toys, enjoyed by 33% of married couples, also reportedly helped increase sexual excitement for both partners.
Although only 8.5% of couples went to see a sex therapist or considered couples therapy, they were part of the group that experienced increased sexual excitement after getting married, so their opinion shouldn’t be glossed over.
As Lewis explains, while it isn’t the most common scenario, many couples do improve their sex lives after marriage.

“Depending on the situation, some couples will feel a spark when they get married, being in the ‘honeymoon’ phase immediately after getting married.”

“There may be religious or cultural reasons couples may feel a sexual spark after getting married. For those who may have waited until marriage, it may be the first time they’re able to finally feel the freedom to have sex without guilt.”

Even though sex lives weren’t completely inactive during the marriage, 65% of married couples did experience a time of significantly decreased sex frequency. For most, it was caused by a lower sex drive (57.8%). 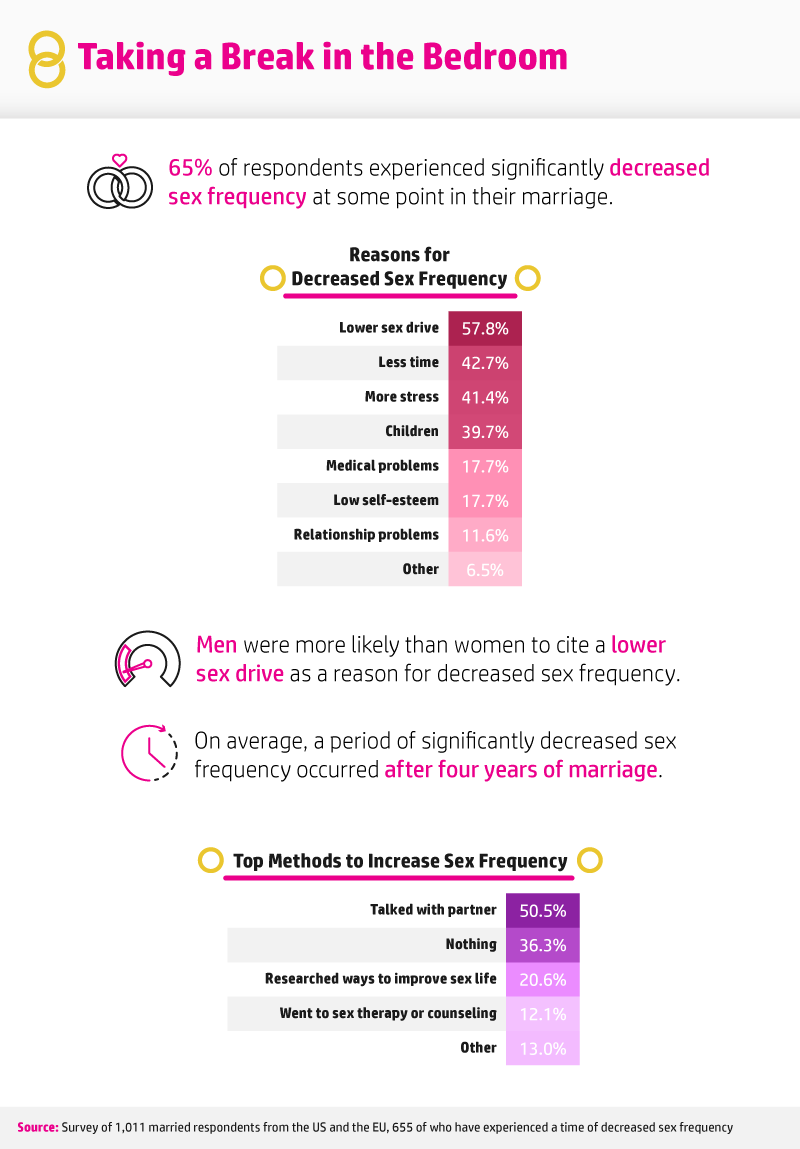 Science tells us that hormone levels falling with age often correlate with lower sex drives in both men and women.
Male respondents, however, were more likely than women to mention lower sex drive as the reason they had less sex in their marriage.
Lewis explains that when life gets in the way, couples frequently deprioritize the health of their sex lives:

“The responsibilities of a true partnership show up quickly in a marriage.”

Sharing bills, a home, possibly kids – the normal stressors of life show up.” For others, she said, there may be less of a spark due to attitudes toward marriage:

“For some, there’s not the same anxiety or excitement that was there during the dating time period. People can take for granted when they’re married.”

It took an average of four years of marriage to experience a sexual slowdown.
But only 50.5% of people even spoke to their partners about it.
More than a third of married respondents said they did “nothing” once their sex life took a sharp turn.
20.6% used simple research to find ways to recharge their sex lives and 12.1% tried sex therapy.

Fortunately, over 89% of couples spoke about their sexual satisfaction with their partner.
Additionally, the more often couples spoke to each other about their sexual satisfaction, the more likely they were to be sexually satisfied.
Almost 85% of respondents who had this conversation once a week were very or extremely sexually satisfied.

How to keep their sex lives interesting when most respondents did “nothing in particular.”
Uninspired couples become less sexually satisfied. So, let’s take a look at those who did choose to try to keep the spark alive.  .
Thirty four percent  of people still flirt with their spouse and another twenty-eight% planned to have romantic getaways. These examples will led to increased satisfaction, but in some choices has impacted most of the couple’s sexual satisfaction.

The data revealed one last important part: advice. The No. 1 piece of advice from people working to keep their marriage sexually healthy:

“Be honest with your partner about how you feel.”

It’s one thing to know how important communication is, but it’s another to actually act on it. Similarly, Lewis shared her most common tips for keeping the spark alive.“Seriously, schedule sex, and make sure you’re not skipping important parts of your physical relationship with each other, like physical touch and kissing.”
If you’re not exactly sure where to start, Superdrug Online Doctor is an informative and judgement-free place to gather information and find help for your and any future partner’s health concerns, both sexual and otherwise.
Stop by Superdrug Online Doctor today to take better control of your and your partner’s sexual health.

For this project, we surveyed 1,011 married respondents from the US and the EU on their sexual habits.
Five hundred and nine respondents came from European countries, and 502 came from the US. Respondents ranged in age from 21 to 76, with an average age of 39 and a standard deviation of 9.8.
Four hundred and seventy-eight respondents identified as women, and 531 identified as men. Two respondents identified as non-binary.
Outliers were excluded when determining average weeks respondents went without having sex and when calculating the average time in years when respondents experienced a time of significantly decreased sex frequency. Data like these are survey-based and depend on the self-reported recollections of respondents regarding their everyday life.
There are limitations with such data include telescoping, selective memory, and exaggeration.  And we did not statistically test our data, and our campaign is exploratory.